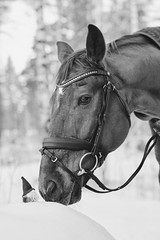 It is common to make and save some styles that are applied to all or most of the photos as part of post processing. Usually these don’t make big changes to the overall colors, but give a certain contrast boost or certain sharpness and clarity enhancements. Heavy tweaks to overall mood and colors are probably done individually for every photo, as such changes might not work universally with different kind of photos. It is actually quite challenging to make a style that works with many kind of photos. I’ve tried to make most of my styles such that they can be used with many different kind of photos. For color tweaks I have so far used Capture One’s color editor, which can give quite problematic color gradations in certain types of photos in cases where the individual color tweaks overlap each other. You might not even notice such problems with most of your pictures.

Obsolete 5600K II
I almost named this style as JACKA (as Just Another KodaChrome -Attempt). It is what it is, an attempts to reach some of the most appealing aspects of newer Kodachrome films. At the same time when I was fine tuning the colors I tried some new tricks to give the style more film-like look. One important part of it was to write into the stone the white-balance setting, here 5.600 Kelvin. When one uses film there is little possibility to fine tune white balance. With correction filters that can happen, but a part of film look is that the color balance changes with the time of the day and light temperature in general. The style is very picky on exposure and many times needs a positive exposure compensation. The style is quite balanced and can be used widely for many subjects, but with quite high contrast it works also in street photography, which one can not say of some of my other styles.
Update: I made a new version that corrects some of the known color problems in the previous iteration. Version updated here on 19.1.2022.

Monochrome Muted
A style that was converted from NS160III -style. Very muted highlights and shadows. Rich though a bit dull midtones. Version updated here on 19.1.2022.

Basics Nature
One of my favorite looks copied from Fujifilm’s Velvia film simulation. While not totally exact replica this is a good looking style for nature and animal photos. Version updated here on 7.1.2022.

Monochrome Clean 1, Monochrome Clean 2 and Monochrome Flat
Three styles in one package. Couple of versions that are “clean” without grain and with light differentiation gives good basic monochrome looks. The flat version is kind of a matte looking style. Version updated here on 18.11.2021.

P400 II Gold Dust
This is a version of my Portra 400 imitation that has added gold hued haze filter giving a bit of a look I have seen in some film photos taken with Portra 400. Version updated here on 15.10.2021.

fPro II
One of my personal favorites with a very sweet look I relate to Fuji’s films. This is not modeled after any certain Fuji’s film, but uses a cool color balance and tuning that, for me, resembles Fuji’s color scape. The basic version’s look is a bit dark in the middle tones and I included a lighter version, though I still like the darker one. Version updated here on 10.7.2021.

NS160 III
My try at the look of Fujifilm’s 160NS film. This has cool tones, low contrast, selective saturation and signature strong reds. Such style would suit people photography unless the reds are too strong for individual subjects. Version updated here on 10.7.2021.

ColorPlus
My try at simulating Kodak Color Plus 200 film. Quite warm all-purpose “cheapfilm” look. As such it is not a master of any trade. This is one of my early styles and I might want to update it a bit, but it is fun style that differentiates from the usual digital look. Version updated here on 10.7.2021.

P400 II
My try at simulating Kodak Portra 400 film. It was my first style I used color charts as an aid, but honestly one has to make compromises as simulating all the colors accurately seemed impossible. Still I think it looks cool and might give you the vibe of Portra films. Version updated here on 10.7.2021.

K14 II
My very first attempt at the Kodachrome -look. I think it still stands as an individual style in the library, though my Obsolete -style is now my favorite. Version updated here on 10.7.2021.

K Fifties
Older try at the look I relate to old Kodachromes from around the fifties. Part of the heavy look of this style is very strong brown tint. Version updated here on 10.7.2021.

kPro II
A warmish but quite neutral style resembling closest to Kodak Portra 800 film. I used here some reference photos, but the reference photos didn’t include wide variety of colors so it is partly a guess-work. Especially tuned for people photography with suitable contrast and saturation. Version updated here on 10.7.2021.

VisionFilm 500D II
My view of the look of Kodak Vision 3 500T tungsten cine film taken to photography use. Daylight balanced according to my preference, but you have all the power to slide the white balance to cooler side in the amount you like (and slightly blueish white balance looks beautiful with this style). The look is uncontrasty and grainy with tiny bit of haziness, just perfect for people photography when clinical perfectness is not needed. Version updated here on 10.7.2021.

Nostalgic color
This style is not made after any particular film or style I have seen, but it gives you warm and colorful look that could have been from a film of yesteryears. The colorscape aims to bring feeling of nostalgy to your modern digital photo. One of my early styles, but I still like it. Version updated here on 10.7.2021.

Basics CC
This style was a study to get the look of Fuji’s Classic Chrome film simulation. There are some contrast variations included. Version updated here on 10.7.2021.

Basics Portrait
A style mimicking the Fujifilm’s Astia film simulation. Works with many subjects, not with portraits only. Version updated here on 17.7.2021

Natural
This is my neutral -style that I can use as a base for some tweaks or just to check a photo without color tweaks. Version updated here on 10.7.2021.

PaleColor Blue
A dark, pale, grainy and uncontrasty look that undresses the scene from anything bold and colorful, to concentrate the attention to the subject. The color balance leans overall more to the gray blue than anything else, but it has slight warmness in highlights. Kind of a cinematic color grading, though very heavy one. Version updated here on 10.7.2021.

Bleach ByPass
A style that tries to mimic a bleach bypass look from film era. Unsaturated and contrasty for occasions you just want that look. Version 10.7.2021

Mundane B&W
My favorite style for black&white photos. I just like the contrast, color filters and the amount of added grain. Everything just works so well together here. Definitely recommended, despite the name I chose for it. Version updated here on 10.7.2021.

Classic Contrast B&W
My take on classic B&W -style with higher contrast is tuned partly after Ilford FP4, but with less flat midrange and highlights. The shadows have rich tones, but black is still black. I would only use this as my B&W if I hadn’t so beautiful options. Version 1 Version updated here on 10.7.2021.

Strong Contrast B&W
A more contrasty B&W -style, but not mindlessly so. Version updated here on 10.7.2021.

DoubleA B&W
This style sprung from the idea of making tone rich B&W -style that suits portrait photography. I found out that the closest film look was Kodak Eastman Double X cinefilm taken into photography use. This Capture One -style is tuned a bit differently with softer look. Version updated here on 10.7.2021.

Homage B&W
Dark, heavy old look that I wanted to resemble some of the photos of old masters of yesteryears, being a homage to the photographers of the era. With this style you might want to find the perfect exposure and it most probably is even lower than what I tuned for this style. Version updated here on 10.7.2021.

Baroque B&W
Dark, heavy old look that has a lot of resemblance with Homage B&W, but still with some clear differences. For me this style is looking like a baroque painting in B&W, hence the name. Version updated here on 10.7.2021.

3 thoughts on “Collection of Capture One -styles”